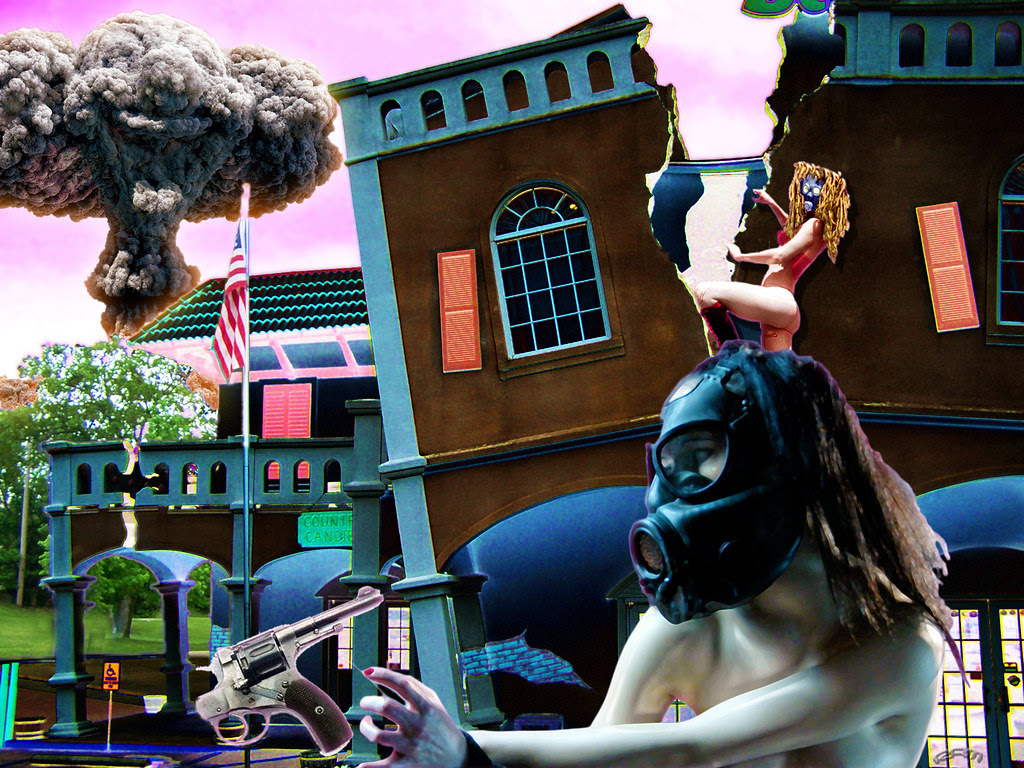 War or Peace? Choose!
You can’t have both; decide…


It’s time for me to share some ideas which will make me unpopular in many circles. To some, the following words may
merely seem to be self-evident truths. To others they will appear as grossly inaccurate and simplistic errors. And some will even see them as fundamentally dangerous misinformation spread by an agent provocateur employed by the Powers That Be.

We live in a chaotic world of competing ideals, lofty hopes, and completely outmoded superstitions, of everyday acts of human kindness, barbarically feuding feudal tendencies handed down from bygone eras, of laudable acts of love, compassion and wholesome valour – a kaleidoscopic mindscape of unbridled emotion, untamed thoughts, thoughtless habits and unexamined assumptions. In essence, how do we get to world peace from here?

The first step toward overcoming most obstacles is to examine them. Sometimes obvious solutions can arise from simple observations. Sometimes the simple act of examination can actually be the sole solution required. The ‘reasons’ for war and violence and all other patterns of behaviour are actually internal mental and emotional programs – inherited or imprinted patterns often misnamed ‘human nature’.

The achievement of true lasting peace – individually and globally – requires individuals to examine the thoughts and programs running through their minds, learning to see where these ideas actually come from, and consciously deciding which thoughts and emotions they wish to continue feeling and feeding.

Who are you? Why are you who you are? What do you think you believe? What do you actually do with your precious time? Are you engaged in creating a healthier world? Or are you simply re-enacting ancient programs, habitual designs and decrepit behaviour patterns inherited from long-dead ancestors, discredited cults or heartless institutions?

The major problems the planet faces today all stem from human ignorance and violence. Ignorance breeds contempt and intolerance. Violence begets more violence. Revenge and retribution create endless, pointless repetitive cycles. How can we break these cycles and redirect human passions and energies in the next generation? By examining ourselves, deciding which dreams to enact as reality and casting out the useless baggage that burdens us.

The world is a hotchpotch of differing cultures and ideologies, yet our global family all plays follow the leader. We all live and learn and change to suit the tempo of the times. When any system proves to work better than one it replaces it’s usually widely adopted. It’s up to those nations that consider themselves advanced and aware to create an example for others to follow.

Friends and readers across the literate world – and Americans in particular – it’s time to take responsibility and change the ancient cycles instead of recycling them. It’s time to enact peace in thought, word and deed. Let’s start with the most obvious behaviour that needs to be urgently corrected and rechannelled; violence.

Violence starts in the heart and mind and can be apprehended and altered before it manifests physically. There’s no reasonable excuse for striking another and no reason for outright murder, just as there’s no excuse for war. It’s time to throw down our weapons and repudiate the self-serving lies spread by profiteering politicians, greedy industrialists, amoral weapon makers and grim financiers. No more excuses. We need to keep these dangerous toys away from the kiddies and adults who kid themselves.

In the current milieu of lies and deception it’s high time for people to stop blaming every terror attack and random killing spree in the trigger-happy states of America on the U.S. Government – and to stop using that excuse to play around with instruments of pain and destruction on any scale.

It’s time to admit that average, everyday people armed with guns in a culture rampant with violence and murder can and do use them all the time. It’s time to separate the major and undeniably false flag events (perpetrated mainly by ‘intelligence’ services working for lethal corporations) – 9/11, the Tonkin Incident, and Oklahoma City for instance – from all the petty vengeances and sundry massacres perpetrated by angry losers and loony tune psych patients with ready access to bullets and guns.

It’s time to assign blame for the all-too-regular Sandy Hook, Columbine and Boston massacres to everyday nationalistic wild west gun culture – a cult of death that revels in mayhem, suffering and destruction. The ‘only remaining superpower’ now resembles a tired, retired, punch-drunk prize fighter reeling around the ring of the globe in search of new helpless victims to pummel into insensibility – before rummaging through their pockets and stealing their wallet and jewellery. In any rational world such a citizen wouldn’t be allowed to run around loose in search of a ‘credible enemy’, much less have access to weapons.

The only remaining shred of credibility possessed by the United States of America rests on the fact that life in many other countries is far, far worse.

Americans need to take a good hard look in the mirror and see what’s blindingly evident to the vast majority who dwell beyond the mazing cloud of mass mediated lies that’s forced down every U.S. gullet. Just glance at most movies, games and TV shows the Land of the Fearful uses to entrain its children – the next generation of unfree wage slaves and hapless cannon fodder.

It’s time to realise that – even though they’re playing right into the hands of totalitarian political control freaks – individual guntoting lunatics can and do commit crimes of violence. Regularly. Repeatedly. It’s very unlike the state of affairs in just about every other relatively advanced place on Planet Earth. Very few people in democratic, pluralistic nations have a wish need to own or carry guns around. And yet shills for weapon mongers try and tell us that every mass shooting in the U.S. is a carefully contrived psyop (psychological operation) designed as an excuse to take their guns from them. How absurd – and yet a silly horde of fearful, brainwashed gun cultists happily suck up the bullshit and respew it out.

Were the Columbine school victims crisis actors? Where the youthful perpetrators psyops dupes? Or were they angry lost kids spawned by a culture of violence with easy access to their family’s instruments of mass murder? Sure, Lee Harvey Oswald may have been a CIA dupe and a patsy, but almost all gunmen who take their anger out on others are merely run of the mill angry dopes, not set-up dupes. How many deliberate and accidental shootings occur every day from sea to shining sea?

The U.S. has made many enemies. There really are plenty of people living in nations the West has mercilessly attacked and destroyed who would like to cause as much pain as possible to Western nations. This is the point behind the openly admitted Neocon(man) creation of a ‘credible enemy’; when you attack an ant nest with a pointy stick for long enough the ants will eventually retaliate. Then you may imagine you have an excuse to be armed to the teeth and ‘fight back’ – in practice attacking anyone you like in a feigned fit of rage that masks deeper, unwholesome motives; profit and control.

It’s time to realise that some victims of Western colonial wars are actually capable of following simple, widely available instructions to make pipe and pressure cooker bombs (like almost anyone in the West). And it’s time to understand why. It’s because their children have been starved, forsaken, maimed and murdered for the sake of money and power for five long, painful centuries. For the last five decaying decades the U.S. has been directly responsible for most of this pain and suffering.

It’s time to realise that this madness only benefits control freak dynasties, rich weaponsmiths, psychotic warmongers, obscenely overripe banksters and powerful invested interests like the rifle association. They lead unwitting Americans to believe in an incredible threat so people live in fear of all their neighbours – and waste huge amounts of money on weapons and ammunition that enrich the biggest assholes on the planet; making everyone afraid of each other and their own shadows so they’ll buy more and more lethal armaments. It’s a very old con game and there’s another sucker born every minute.

Many tools of technology are inherently dangerous; a car can kill by plan or by accident. Yet unlike most other technological tools, weapons are designed for one simple purpose; killing. Guns kill. So do bullets. That’s what they’re made for. And most are designed to kill human beings. How could anyone believe otherwise? How can anyone honestly equate a car with a gun?

Why should anyone imagine they ‘need’ a gun in the modern world? Why do so many people believe it’s safer to live in a place where everyone is armed? How can anyone believe a better world can be built if everyone is armed to the teeth? How can any nation imagine it has the right to build, own – and use – nuclear weapons? It’s painfully obvious that all these addled notions are identically daft. It’s just plain M.A.D. – the gun-ho mentality which makes Americans think they have the right to invade other people’s countries, steal their resources and murder their children with impunity every time their bloodthirsty govcorp releases its dumbed down, rabidly vicious dogs of war...

You can help this invalid artist continue by giving enough for a meal or drink if youre able -   Donate any amount and receive at least one New Illuminati eBook!